Observing the Dark Side of the Universe

Professor Sarah Bridle (Professor of Astrophysics, Manchester University, School of Physics and Astronomy) will talk about dark matter and dark energy. These appear to form the vast bulk of the universe, but we know little about them; Professor Bridle will tell us what experiments are being carried out to increase our knowledge of these strange elusive entities. 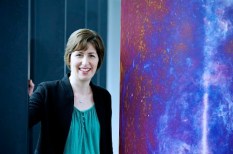 She has had prestigious awards in the UK and Europe including a Royal Society University Research Fellowship, the Royal Astronomical Society’s Fowler Award and European Research Council Starting and Consolidator Grants.

She is author of over 70 refereed publications which have over 3500 citations. Most of her work has focussed on trying to uncover the nature of dark energy using data from the biggest ongoing cosmological imaging survey, the Dark Energy Survey, which is imaging one eighth of the sky and measuring shapes and approximate distances to 300 million objects.