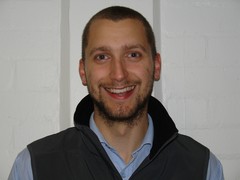 Dr Peter Millington from Manchester University has agreed to kick off a Scibar move from Particle Physics towards String Theory by discussing with us the fundamental disagreement between Relativity and Quantum Mechanics.

In our March session he will describe how String Theory can help this quandary between the two MOST PROVEN theories ever.

As of now, the plan is to follow the March session with a third on the details of String Theory followed by a fourth session on ‘What would be different in the world if the currently unprovable String Theory was correct’.

More discussion is still needed before the final two sessions are defined.

This entry was posted in 2014, monthly_meeting and tagged physics, theoretical physics. Bookmark the permalink.