Exhibition at the World Museum Liverpool

Knutsford SciBAr recently attended the “Science Explosion” event run by the BA for children at The World Museum, Liverpool to launch the 2008 BA Festival 2008.

Following on previous themes we took with us a rig designed and built by SciBArian Roger Gittins. The children first made and decorated their rocket nose cones to to fit to the rocket then fire their pop bottle rockets over the heads of the crowd in the Gallery at The World Museum. During the peak 5 or 6 hours rockets were being fired by the children at just less than one per minute and 250 children had the pleasure of firing their own rocket. 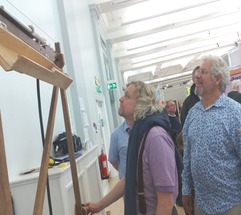 TV science guru Adam Hart-Davies (on the right) showed a healthy interest in the SciBAr launcher.

The SciBAr stall was manned over the weekend by volunteers, including Christine Skinner (on the right). 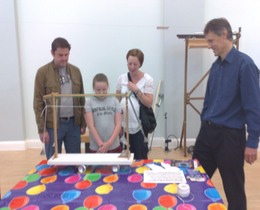 David Skinner (on the right) and the chaotic pendula

The team were led by SciBArian David Skinner who also manned the stall designed and built by SciBArian Chris Grice to demonstrate various chaotic, jointed and linked pendula and their strange behaviour.

At the end of the day the Knutsford SciBAr team were exhausted but exhilarated.