Panspermia – did Life really originate on Planet Earth?  If not, then where? 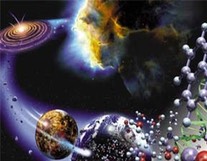 Professor Chandra Wickramasinghe from Cardiff University introduced us to the basics of Panspermia and brought us up to date on current thinking about Life originating from outer space and travelling to Earth on comets and meteors. By careful spectroscopic observation and analysis of light from distant stars, Fred Hoyle and Chandra Wickramasinghe found evidence of traces of life in the intervening dust. They proposed that comets, which are largely made of water-ice, carry bacterial life across galaxies and protect it from radiation damage along the way. It is now universally accepted that space contains the “ingredients” of life.

Hoyle and Wickramasinghe then broadened or generalized the panspermia theory to include a new understanding of evolution. While accepting the fact that life on Earth evolved over the course of about four billion years, they say that the genetic programs for higher evolution cannot be explained by random mutation and recombination among genes for single-celled organisms, even in that long a time. The programs must come from somewhere beyond Earth. 100 tons of comet material lands on the Earth “every day“.

This entry was posted in 2007, monthly_meeting and tagged biology. Bookmark the permalink.